O Best Beloveds, Dave died on Thursday at 2:08pm. He wasn’t responding to any antibiotic or other treatment, so all that was stopped, and finally, the respirator was removed at 2pm. Minutes later, with his great love Nettie holding him, he slipped away.

I can not thank you enough for the messages of support and love you sent. Nettie read them all to him, and it made him happy during an otherwise largely miserable time.

It has been said that when a person dies, it’s like a library burned down. I think this is especially true of Dave. From his fascinating childhood, where his parents would write to people they admired–Christopher Isherwood, say–and end up having them over for dinner and forming friendships, to his own adventures with live music and theater and social justice, Dave had stories. Every five minutes for the last few days, I’ve thought “But you never told me that story. Or that one. Or the other one.” He had a lot of them, but of course, we had plenty of time to hear them. Didn’t we?

Thursday night, Steve and I went to a show by some other dear friends, exactly as Dave would have wanted it. But our grief was too thick, and even the incredible music they were playing could not penetrate, and so we gave up. But outside the club was a baconwrapped hot dog vendor. This is going to seem like a frivolous digression, but bear with me. Baconwrapped hot dogs are this indigenous (unless they originated in Mexico, which is quite possible) Los Angeles street food; vendors push small carts with hot plates or sterno on them, and grill the dogs, which are then placed on buns loaded with fried onions and the usual condiments, including mayo (which, believe me, only adds to the deliciousness). They are a small wonder and once we discovered them a few years ago, my tribe felt all events were capped off to perfection if the bacon wrapped hot dog carts were there. Dave was a particular fan; I think he went to some things (Hollywood Forever’s Day of the Dead, for example) partly because the baconwrapped dogs came out in huge quantities.

So when we saw the cart, we said “Oh, that’s it. There it is.” And we bought one, fully loaded, and toasted our friend.

If at some point in the next little while, Beloveds, you find yourself eating or drinking something good, or listening to a particularly fine piece of music, or at the theater, please, raise a look up and say “Dave Schmerler. He lived.” 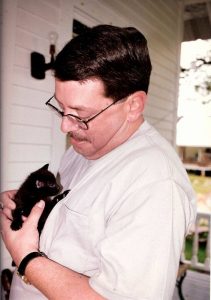 ← Whoops! Corrections and More Plugs In Which We Continue To Put Our Faith in Chemicals →