I’m trying to come up with descriptions of India, O Best Beloveds, that won’t come off as condescending or hopelessly naive. I think I’m going to fail. Better writers than I have spent lives trying to capture the place, and I hope to do so in an email? The adjective that most comes to mind is “bewildering”. There’s no way I can do it justice. I’ve started and erased this email three times already. Let’s see what I can do with some little impressions.

–Color. It’s not so much that India’s colorful–you knew that without being told–it’s that the color thrives even in the face of grinding poverty. Even the poorest of women wear bright saris, even if they are living in conditions too horrible to discuss, or working at a construction site. Even the humblest temple has paint and intricate flower strands as offerings. My travel wardrobe is a dirt defying black and brown combo, but I wanted bright pinks and oranges, I wanted to saturate myself with color and sparkles. Color is just one of the ways India is sensory overload.

–Food. Oh, boy, did we eat well. On the eve of the trip, I recalled that I don’t actually much like Indian food, which put me into a bit of a panic since we were about to spend nearly three weeks in India. I needn’t have worried. I’ve never had Indian food in India and while obviously we can’t say for sure that it is unilaterally superb, we can say that what we ate ranged from very good to superlative. Our first hotel in Delhi had a wonderful cook who fed us a chicken curry with a side of stewed eggplant on top of a dollap of yogurt, and that was a terrific first dinner, and it just kept going from there. Unfortunately, I didn’t write down what we ate, so I don’t know the names of anything, and all I can say is “There was this with a thick tomato/butter sauce, and that with a spinach sauce.” Trust me, it was all wonderful and any Indian food you’ve eaten is probably just a pale imitation of the real thing.

But the two things I remember well come courtesy of Vibha’s mother. Tyler is a God School friend, and so, being smart, he married the brilliant, beautiful and all together awesome Vibha who comes from Pune, near Mumbai. They kindly let us crash the last few days of their vacation there, visiting sights in Pune, eating (the first thing they fed us translates as “cheese spark” and it’s sort of a paneer kebob with a smokey flavor) and more. After his first visit to his in-laws, Tyler told me about a dish called “shrikhand”, which is sort of (slightly rose flavored) yogurt that all kinds of fancy things have been done to, that one eats with a circle of puffy unleavened bread called puri. It tastes like desert, but it’s a main meal component, and a tricky thing to make. How strange and wonderful life is that I got to go from hearing about this magical dish in the cafe at school to actually eating it in Vibha’s Pune home. It was everything one could have hoped for. Additionally, after a trip to a ruined old fort on a mountain top, and after half of us decided against eating the incredible onion fritters Vibha ordered from a nearby shack (the reasoning went: okay, freshly made, we can see them prepare it, and the hot oil should kill any bacteria, but that oil is two days old. Is that fresh enough? Tyler and I decided no, Steve and Vibha decided yes, and let the record show they had wonderful fritters with no ill effects.) Vibha promised her mom would make them for us. I ate 147 all by myself. They were so, so good. Vibha’s mom rocks. Everyone should visit her when they go to India.

I should also mention the tandoori fish Steve and I had in the seaside town of Cochin. Cooked the usual style, smeared with spices, it was moist and succulent, just a platonic plate of fish. Also the Kerala Thali–thalis are sampler plates of various local specialities and Kerela is the area Cochin is in. It’s served on a banana leaf and each item is placed on the leaf with a mind to a particular order and placement. Also Steve’s fish rubbed with Kerela spices and cooked wrapped in a banana leaf.

Then there was this: 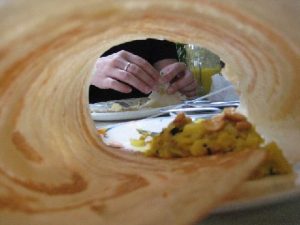 That’s looking through a football-sized dosa Steve got at a favorite cafe of Vibha’s in Pune, at me eating a uppattham with cheese and onion. Note also mango lassi. I’m totally craving lassis–fruity, sweet, with honey, I don’t care, just let’s find out if someone nearby makes a credible one.

–Temples, elephants and the backwaters. We visited as many temples as we could, because they are endlessly interesting and always different. There was the one covered in parrots and monkeys, like something out of Kipling, the Sikh temple where a chanting solemn yet joyous religious performance was going on as we entered and Steve was made to feel very welcome with his recorder, the tower dedicated to a swami that had bas reliefs showing great moments from his life as you climbed up and up. Oh, and the one that had the giant Ganesha covered entirely with butter and other ornaments. And the giant bull covered in coconut and palm oil.

We spent one morning at an elephant camp watching the occupants–a male, three youngsters and a female–get baths. This involved walking them down to the river, and having them lie down in same while they were scrubbed with a coconut shell. The blissed out look presented by all five indicates this is a procedure of which they approve. After, we not only got to pet the elephants as much as we wanted (the baby’s curious nose roamed over us, looking for snacks) but also got to ride the large female, bareback. I held on to a rope around the elephant’s neck, Steve held on to the rope ends, and we swayed with a timeless rhythm as she stately moved about.

The backwaters are canals off a river and a lake in the area around Cochin, which is in the southwest of India. One takes a long boat, with seats, moved along by two hardy men with poles, on a leisurely six hours of exploring jungle-like terrain. After many days in crammed and crowded cities (Delhi, Agra, Bangalore, Pune), this was a remarkable change of pace and visuals. v –There’s a lot more–the extraordinary friendliness of people, the crush of crowds, the mania of driving as one dodges cars, pedestrians, cows, ox carts and stray dogs all without any allegiance to traffic laws, the slums that come up to the doorsteps of wealth, the dirt, the heat, the sweetness, the light, the bells clanging in temples, the incessant horns honking out on the roads, the liquid music of the accents of locals, that my paper went really well at the conference–but I’m despairing of making sense of it, now or ever. I’m more and more glad we went and more and more convinced everyone should go.

But now we are home and blood tests have already been taken to begin the process of determining the next step in the cancer part of Cancer Chick fun. More on that as it develops over the next few days.

← Let Nothing You Dismay A Little More India →