Let’s just hit the lead right at the top, for a change, O Best Beloveds.

That’s after a mere two and a half rounds of oral chemo.

You know, by way of stating the obvious, I have to say that I like writing emails about lowered tumor markers much more than I like writing ones about rising markers. Having only to choose.

So how is Chemo of Unexpected Efficacy? Not bad. My hair is still attached to my scalp, which bodes well (it should have started thinning at 3-4 weeks if it was going to fall), though given that I experimentally tug on it several times a day, it ought to be loose just from that. It continues to feel a bit fragile, still not particularly robust hair, and it remains thin on top, which doesn’t make me happy and requires careful head covering when in the sun, lest my scalp burn. I am experiencing what is known as “hand and foot syndrome,” to wit, dry, sore, tingling, peeling extremities. Some of that has been relieved by a supplement Jill turned me on to (thank you, dear!), which I’m too lazy to go downstairs and get the name of, but I do have to hold ice cubes in my hands from time to time to cool them off, plus apply Bag Balm or something else thick and greasy to my feet most nights. Even less welcome, towards the end of cycles two and now three, I’ve sprouted spontaneous blisters or at least, have extra tender parts to the soles of my feet, so I walk around rather gingerly, and painfully, for a few days. I had one day last cycle where I had to give up moving about the house almost entirely, and had to have things fetched unto me. (This latter isn’t necessarily bad from my perspective, but Steve really does have things to do other than wait on me.) Slippers seem to help some, so, yay, excuse to buy slippers! I get a bit of a funny tummy some mornings from the chemo dose, so I’m taking daily doses of Compuzine, the anti-nausea med, with my AM chemo dose and being sure to take the pills on a full stomach. That helps a lot. It’s really not that bad at all–it’s mostly just being frequently aware of things one doesn’t normally think about, like one’s feet or one’s stomach. But as Steve just said, vis a vis, my new numbers, now I don’t feel so bad about those feet.

As for other Cancer Chick endeavors, it looks like I’m going to be writing about Cancer: The Extended Dance Remix for the Times, which is very nice of them. More on that when it happens. The Lifetime movie is finished, and should be airing starting in September. I will send the date when it’s confirmed. I met cast member James Denton, thanks to the ever excellent Jeff, and gave him a copy of the book, which he was graciously enthusiastic about. In turn, he reports that everyone involved with the movie is most pleased with the project. Good to hear. If you are curious about all this, you can get copies of said book at Lulu.com. It’s now also on Amazon, if you prefer. In about a month, Rick and I will be embarking on Plucky Survivors See America 2: The Midwest Express, and we will be doing daily updates from there if you would like to follow along as we experiment with barbeque and kitsch, in that order. This time, you can even sign up for an RSS feed. Get a preview at: PluckySurvivors.com. Speaking of family members and writing, Steve is experiencing possibly the only full artistic freedom of his life as he writes his weekly world music column.

And now, I must go engage in some unbridled booty dancing. Also, possibly cupcake eating.

PS: Speaking of Jeff and his excellence, he took the following photo of Steve and me at his wife Lisa’s superb Big Sugar Bake Shop on Harry Potter release night, which was a charming party, and not just because Lisa made Chocolate Frogs and Dark Mark cupcakes among other treats. Doesn’t the photo look like scene from a 1930’s cafe, by Cartier-Bresson? 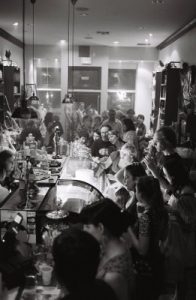