O Best Beloveds, a proper Jazz Fest round up in a few days; I’m off to chemo now and probably won’t be up for it for a little bit. But know that it was delightful and that I’m bitter and surly that it’s over, as I am every year, and also that my hair is falling out, which I am not taking with good grace.

But this space is to talk about someone else. Steve and I have attended Jazz Fest 19 years straight, both weekends. Most of our tribe has done the same. The very first year, we noticed a fellow dressed in high octane colored clothing, lots of it artistically shredded and fringed, cruising around the aisles of the gospel tent, skipping and dancing and waving a handkerchief. He would dance all day long, virtually non-stop, though sometimes he would take his revelry to Congo Square. Derk informed us that he was from Berkeley and his name was Wing of Life, or just Wing. Okay. We formed certain conclusions about him, as perhaps you are doing as well. But as the years went on, the first Wing sighting became a joyous symbol that Jazz Fest had properly begun. We were also there when the Gospel tent organizers brought him on stage to read his manifesto, a lucid, intelligent, humanist doctrine that revealed great depths about Wing. Our affection for him increased. He would always pose for photos, and was happy to chat with anyone, again revealing someone wise and high on nothing but life and the spirit, however you capitalize the latter or not. As the years went on, the knee braces came out, and the skips weren’t as mighty, and the once fat free body blurred a little at the middle, but the joy was never less than all.

Last year, Wing wasn’t at Fest. We worried. Rightly so. A few months later, word came around, mostly in the form of an email Wing himself sent. A leukemia that he had battled some time before had returned, and there was not much to be done for it. Wing decided to stop treatment, and finish up life on his own terms, much as he lived it, one assumes. “The Wingman has left the building” he wrote, with the same sort of calm that he always showed, even at his most frenetic dancing. 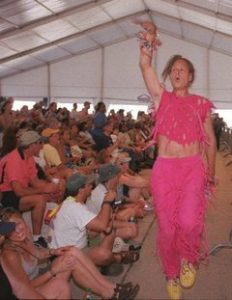 This year, his friends gathered in the Gospel tent, dressed in their best fringed outfits, and danced for their friend. Then they scattered his ashes in the tent, as he had requested.

Diana and I did our own tribute. 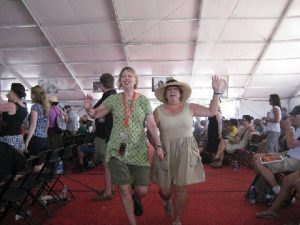 We decided that henceforth, instead of a Wing sighting, a skip or three around the gospel tent in his honor would be the way we considered Jazz Fest officially begun.

Thanks, Wing. We miss you.